There are few people in Connecticut defending the current system of distributing Education Cost Sharing (ECS) grants. Sure, there’s a formula that is supposed to guide annual appropriations, but there are two big problems. To start, the legislature hasn’t ever appropriated the level of funding the formula calls for. Given the economic tumult of the past decade and Connecticut’s somewhat anemic growth rate, it’s not hard to understand why this is the case.

Less understandable is how the legislature chose to allocate ECS funding. According to testimony submitted by Connecticut Voices for Children, the line item for ECS grants is about 77% of what it ought to be if it were fully funded. As I’ve noted in a previous post, some towns get much less than what they should expect at this funding level and some get more. A lot more. 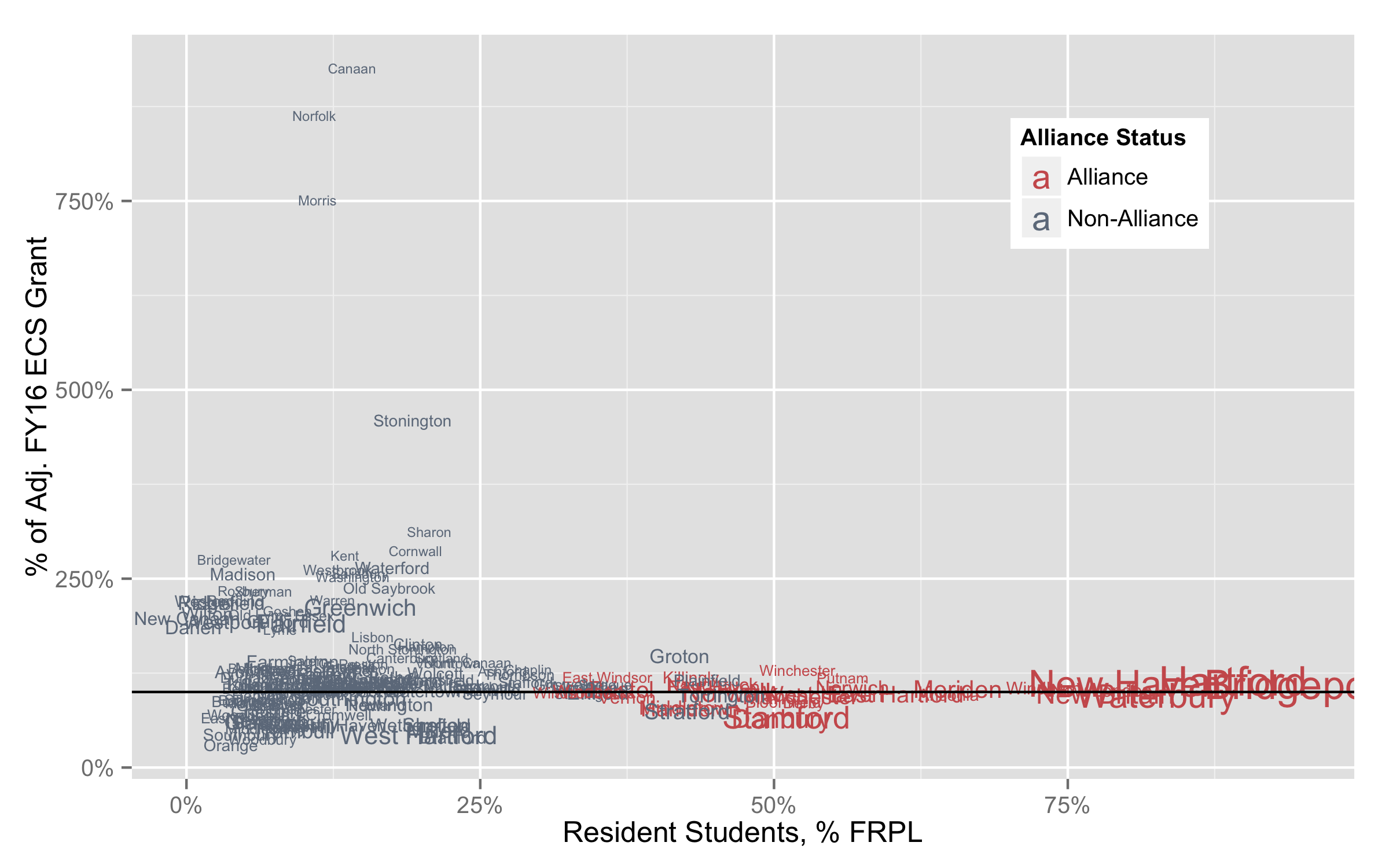 The chart above illustrates how close each town is to their targeted grant at a 77% funding level compared to the town’s level of student poverty1. It’s pretty clear that there are many towns with low levels of poverty getting much more than they should be getting in ECS funding. Here’s the same chart with a logarithmic scale on the y-axis to make it easier to see which towns we’re talking about. 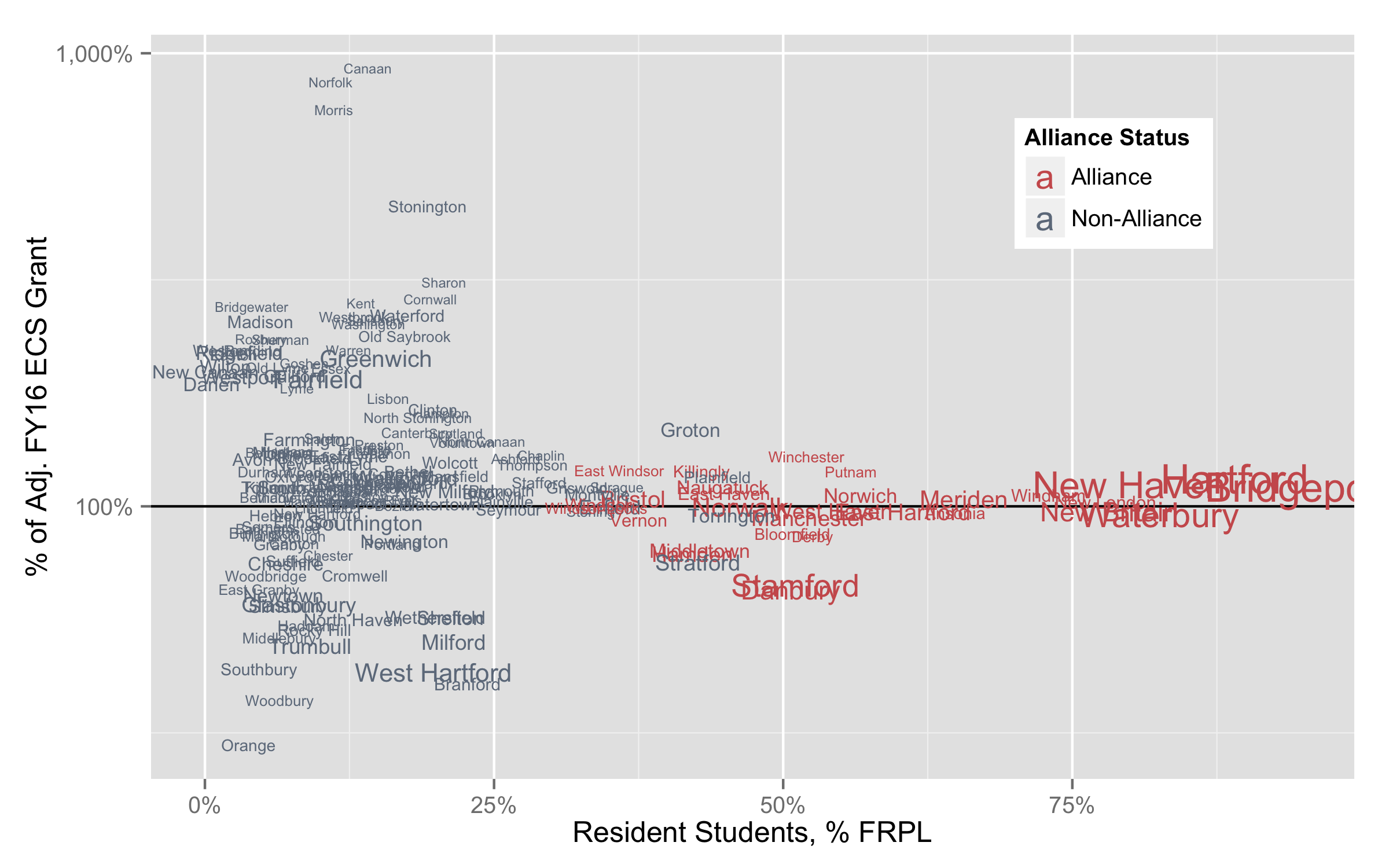 Looking at this problem in real dollars shows a slightly different picture. A few towns (West Hartford, Danbury, Milford) are underfunded by millions and millions of dollars, while the big urban centers (Hartford, Bridgeport, New Haven) are getting at least $10 million more than they are supposed to receive. 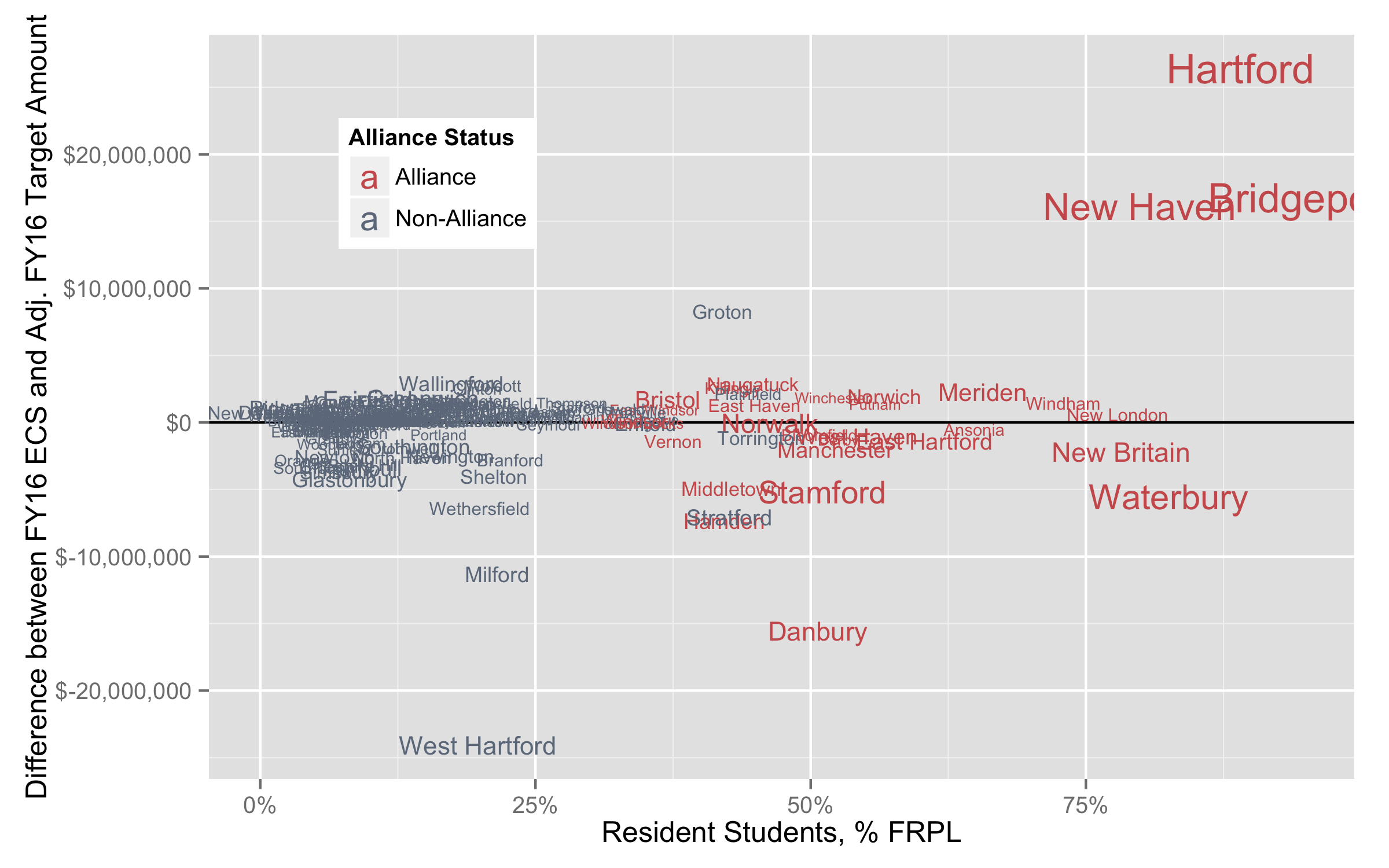 I’m not too worried about the big cities getting relatively more funding at this point. Our state’s education funding formula should gives more weight than it currently does to students with additional learning needs and to towns with high concentrations of poverty. These cities have both, so I think this divergence from their adjusted ECS grant is justifiable.

It’s much more difficult to come up with a good reason for overfunding districts with low levels of poverty. In effect, our state is providing extra subsidies to school systems in some of the most affluent communities in the state at a time when many school systems are struggling with their towns to meet the needs of their students.

###What did the Appropriations Committee do to address this problem?

The Connecticut General Assembly’s Appropriations Committee attempted to address this issue in their version of the Governor’s budget bill, H.B. 6824. While the Governor’s initial budget would flat-fund ECS grants for FY16 and FY17, the Appropriations budget would direct an additional $3.7 million in FY16 and $10.6 million in FY17 to some of the most underfunded towns.

Unfortunately, all other towns were held harmless, meaning that overfunded towns will continue to enjoy their ECS windfall at the expense of districts with greater financial needs. An updated version of the chart we started with doesn’t show a very different picture by FY17. 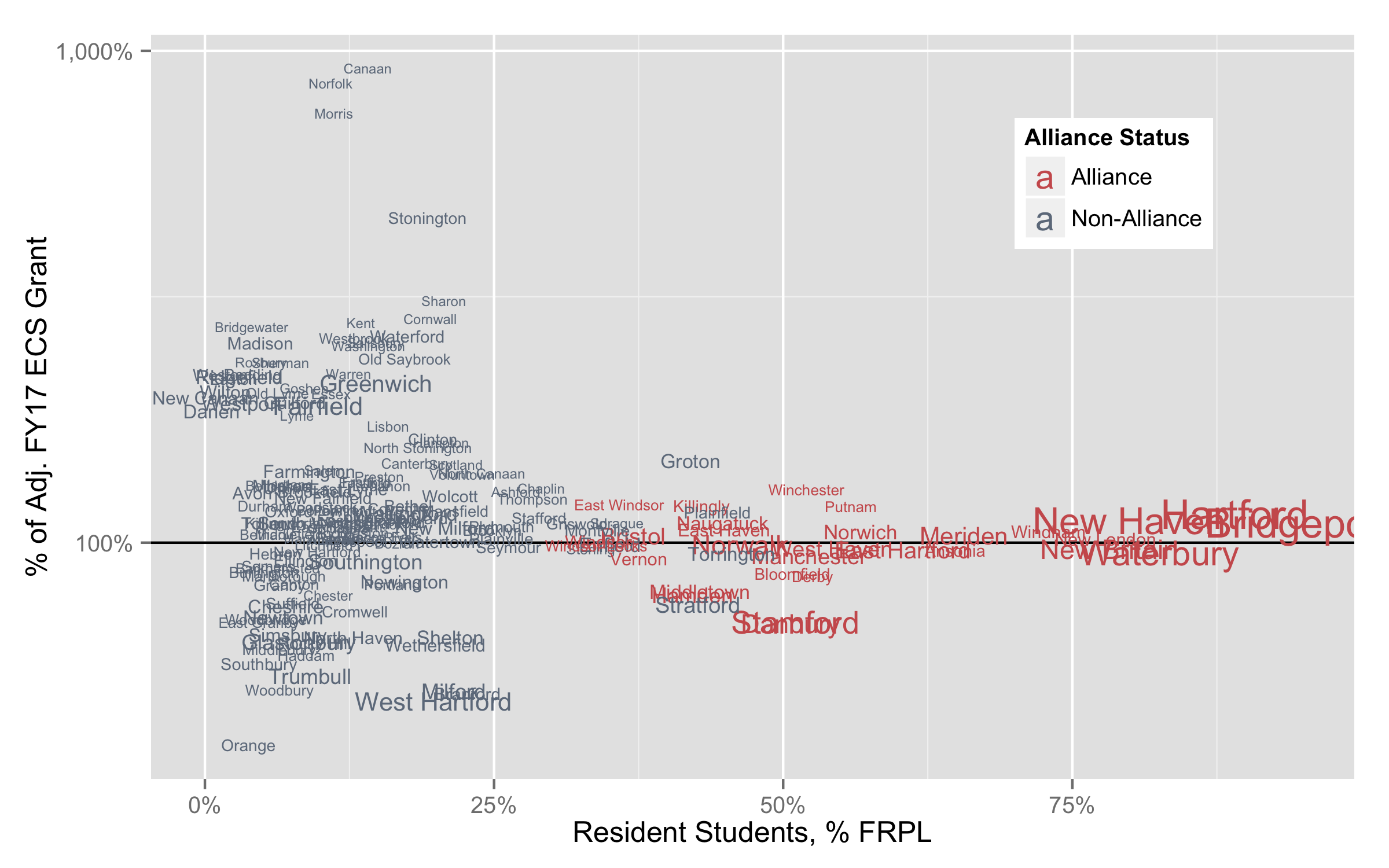 What would happen if our legislators decided to end the overfunding of districts with lower levels of poverty? Would we be able to end some of the most egregious examples of under-funding in the current system of ECS grants?

First, we would need to decide which overfunded towns should lose their windfall. As noted earlier, I don’t think it’s wrong to overfund the big cities given the challenges they face. Instead, I’ll pick a limit of 25% Free/Reduced Price Lunch (FRPL) resident students to decide which towns should lose their ECS windfall. More than a third of Connecticut students qualify for FRPL, so I think it’s a fair cutoff to determine “lower poverty” towns.

So how many towns are overfunded and have fewer than 25% of their resident students in poverty? Ten? Twenty? Nope - the answer is 88. In other words, more than half of Connecticut’s 169 towns are lower-poverty towns getting more ECS funding than they ought to - about $59 million extra each year.

That $59 million in overfunding to towns like Greenwich, Fairfield, and Guilford could go a long way towards bringing some of the most underfunded towns closer to their ECS target grants. 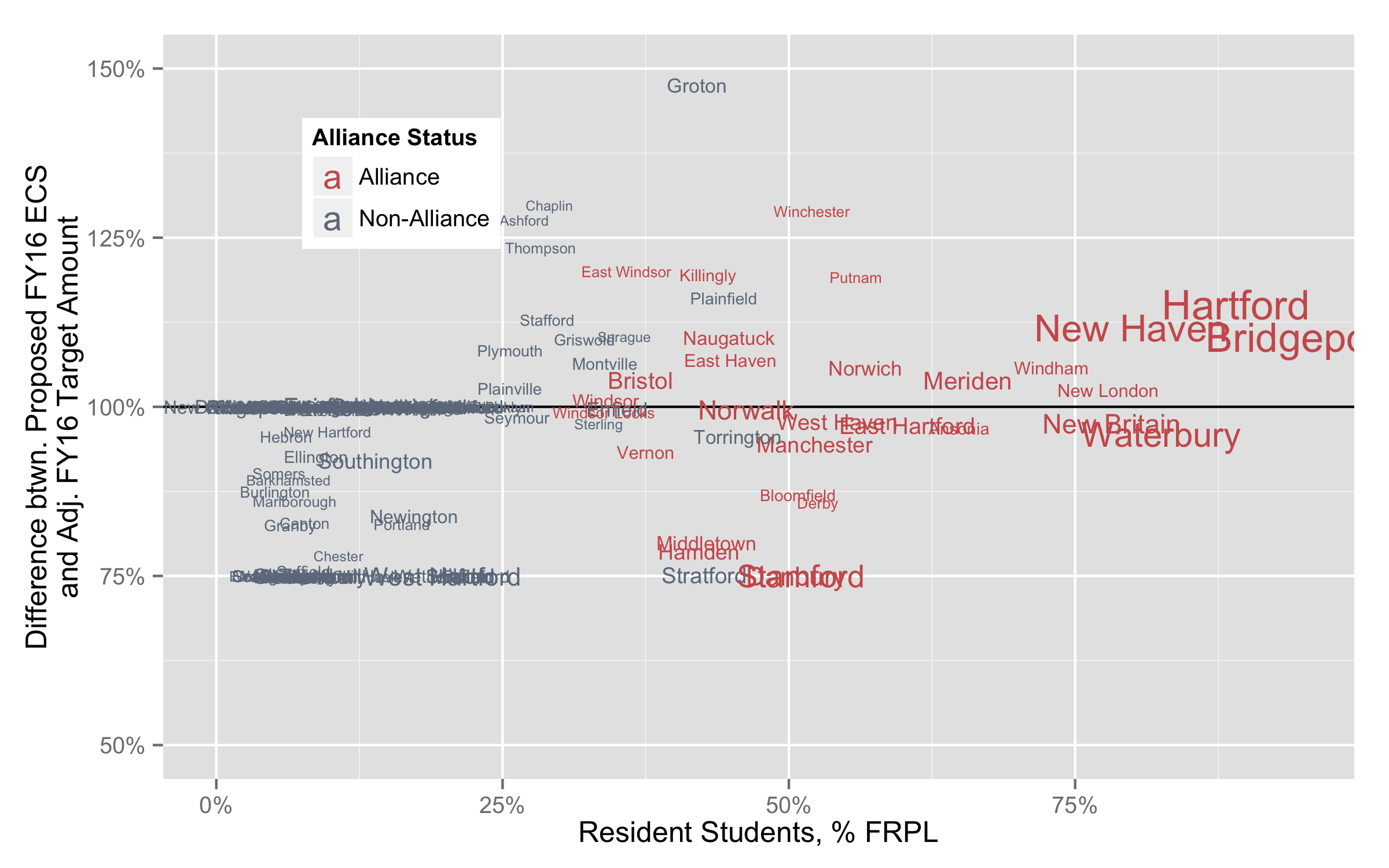 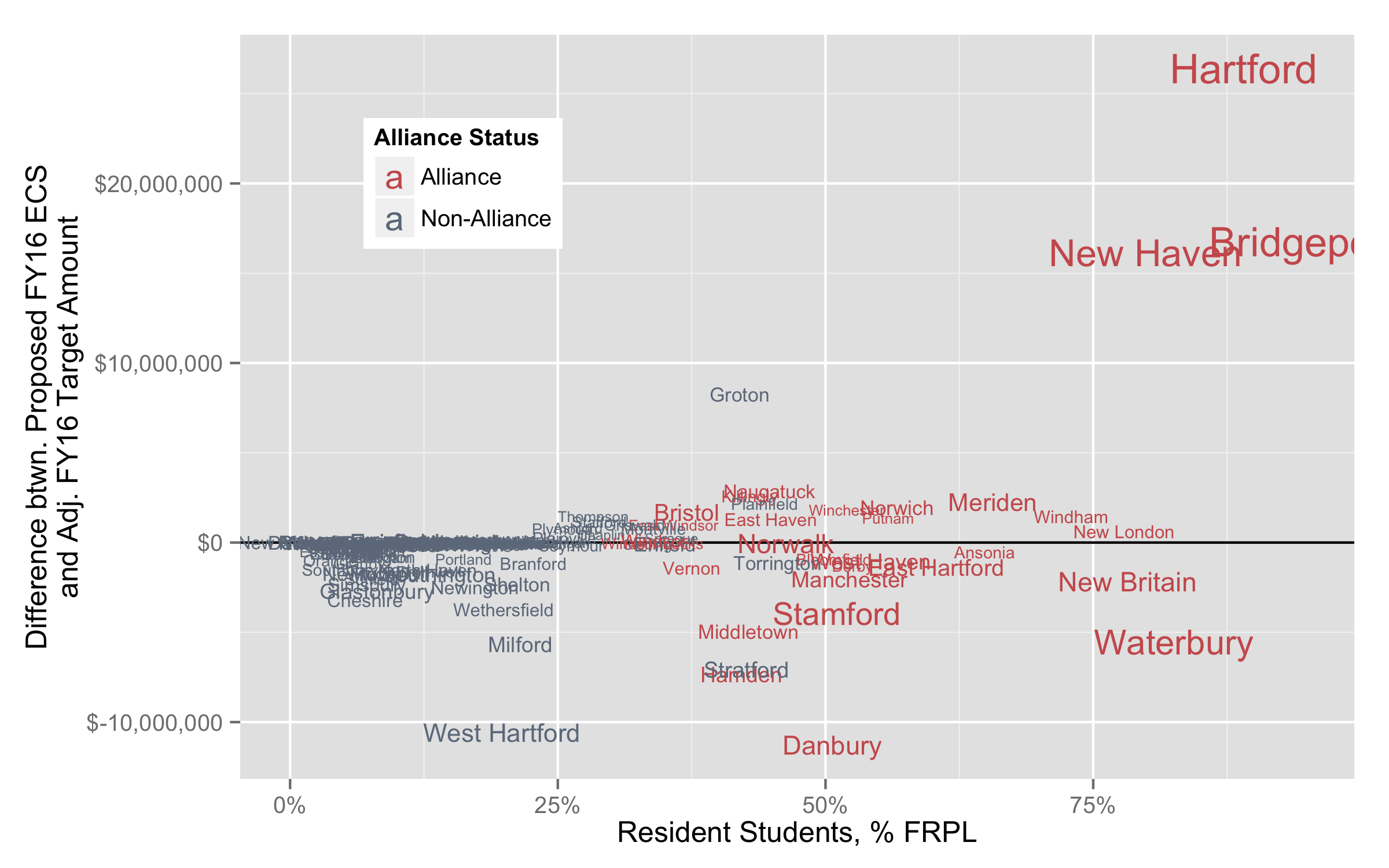 We could use some of the $14 million left over3 to ensure that no town was more than $7 million away from their adjusted ECS grant. This would impact four towns (Danbury, Hamden, Stratford, and West Hartford) and cost about $8.3 million. 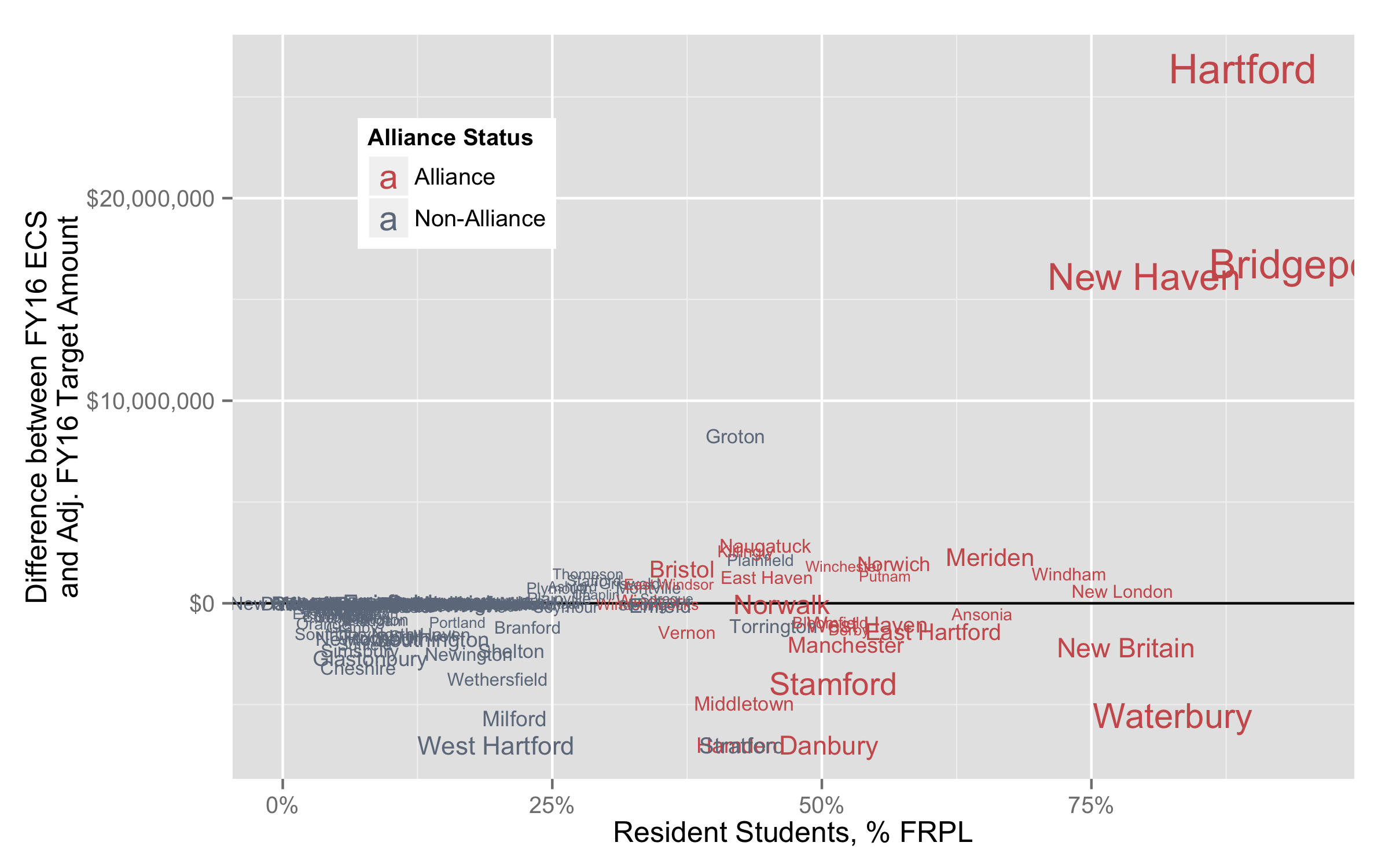 This would leave $5.7 million that could be used in a variety of ways to help improve the quality of education in Connecticut’s most challenging areas instead of subsidizing towns with relatively low levels of student need.

I can understand why the Appropriations Committee chose to address towns with severely underfunded ECS grants. It’s always easier to give towns more grant money than it is to take it away. It’s easy to say that as long as ECS isn’t fully funded, that no town should see a cut in their ECS grant.

Those easy choices have consequences. The ECS formula, while flawed in many ways4, does call for state aid to be distributed according to town wealth and student need. Ignoring the formula’s prescribed distribution has placed the state in the position of benefiting pretty affluent towns at the expense of the underfunded towns. In my example above, the towns identified as underfunded had nearly a quarter of their students qualifying for Free/Reduced Price Lunch (22.6%). In the overfunded, low poverty towns, that rate is only 10.9%.

We elect leaders to make hard choices, but they’ve been taking the path of least resistance when it comes to ECS. There’s no way to get around it: the current distribution of ECS grants benefits our state’s wealthiest towns, forcing towns with more students in poverty to rely on local property taxes to make up the difference.

Every year our legislators use the underfunding of ECS as an excuse to continue this practice is another year of additional burden to the students and taxpayers in these communities. It’s time to stop taking the easy road and do what’s right for our state’s towns and students.