What would happen if we actually followed the ECS formula?

I plan on addressing those concerns in subsequent posts, but for a moment, let’s take ECS at face value and assume that the underpinnings of the formula are correct. If political processes had not brought Connecticut off of the ECS formula and we distributed current funding according to the formula, how might that change how dollars flow to towns?

Right now, the ECS formula is somewhere around $650 million under-funded. That is to say, the legislature and governor have not found a way to follow the ECS formula as it was originally intended to operate. In lieu of actually following the formula, the money that flows from the state to towns to school districts has been manipulated by politicians each legislative session since the ECS formula was adopted.

In fiscal year 2015 (FY15), ECS was about 75% funded, meaning that the state is paying about three quarters to the dollar of what the ECS formula actually dictates.

You’ll be shocked, shocked to learn that some towns are earning more than 75% of their ECS entitlement, while other earn less!

Which towns are doing better/worse than they should be doing if current dollars were distributed based on the ECS formula? 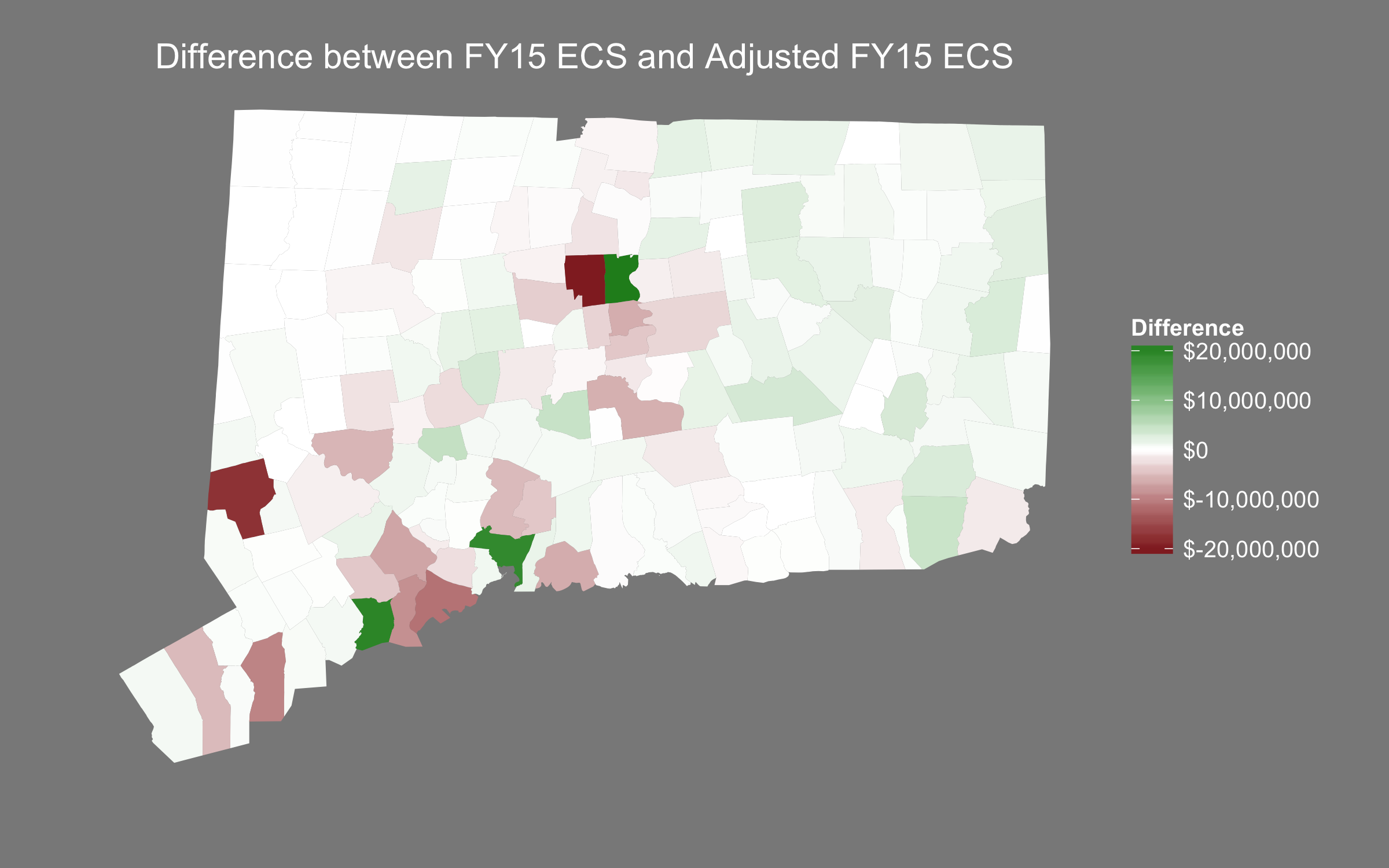 Which towns are benefiting from the current flow of ECS funding?

Unsurprisingly, the biggest beneficiaries of the current distribution of ECS dollars tend to be Alliance Districts, a collection of 30 low-performing districts the Malloy administration placed a priority on supporting with additional funding (identified in the table with a *).

Twelve towns are under-funded by at least $5 million according to the current ECS formula. West Hartford falls $20 million short. Danbury is $17 million short and Milford is more than $11 million under-funded:

It’s surprising to see five Alliance Districts on this list (again, identified with a *). The combined under-funding of these five districts (Danbury, Norwalk, Middletown, Hamden, and Stamford) is about $43 million, which is less than the $60 million over-funding of the big three cities (Bridgeport, Hartford, and New Haven).

Looking at raw dollar differences is helpful, but Connecticut is a state with a few large towns and many medium and small towns. Let’s compare what towns receive now as a percentage of what they ought to receive if we followed the ECS formula with current appropriations: 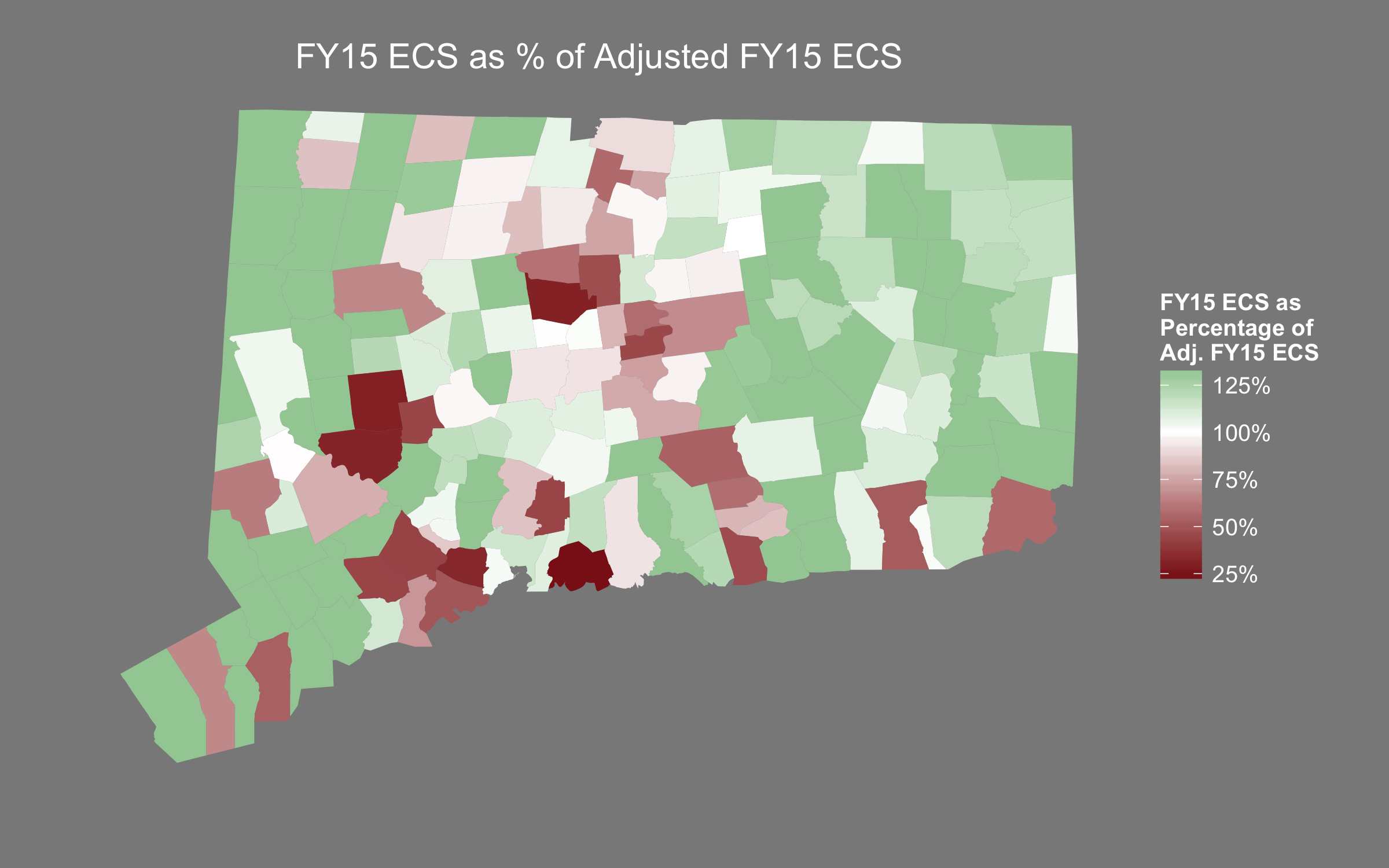 Now we’re able to see which towns are really benefitting from the current flow of ECS funding. There are 53 towns in Connecticut that receive about 32% more ECS funding than they ought to, given the current level of total ECS appropriations. This includes affluent towns like Greenwich, Darien, Fairfield, Madison, and Westport.

Which towns get the short end of the stick? Well, there are a dozen towns that receive less than half what they ought to receive under the ECS formula:

The place I call home, Branford, gets less than a quarter on the dollar of what we should be getting according to ECS with the current level of total funding distributed via the ECS grant.

Again, I don’t think the current ECS formula is correct,2 but this thought experiment highlights the key challenges of reforming Connecticut’s school finance system if we kept total spending flat:

Instead of waiting for a court to compel the legislature to change ECS, leaders of middle-class towns and Alliance Districts should be working to develop an school finance “grand bargain” that could be implemented without significant additional revenue. This would likely need to include schools of choice (magnets, charters, etc.) along with some sort of regulatory relief to affluent towns that would stand to lose funding.

Will any leaders take on this challenge?